By Jennifer Birch and Stefan Brannan

Singer-Moye (9SW2) is a multi-mound Mississippian center located in the Lower Chattahoochee River Valley of southwest Georgia. The site’s occupation has been estimated to span ca. A.D. 1100-1450 (Blitz and Lorenz 2006). The site core comprises a mound-and-plaza complex covering some 14 ha and including five flat-topped earthen mounds, three dome-shaped mounds, and two plazas.

The site has been the subject of intermittent excavation since the 1960s. In 2012, students and faculty from UGA initiated a new program of archaeological research at the site. Brannan’s shovel test survey of adjacent UGA-owned lands, including the site core, indicates that the total site area comprises some 31 ha, with additional residential occupation undoubtedly extending onto landforms beyond the survey area.

Our work at Singer-Moye has two primary objectives: 1. To unravel the occupational history of the settlement, with a particular focus on off-mound residential occupation and 2. To understand how changes in the community centered upon Singer-Moye relate to larger, contemporary patterns in the geopolitical landscape of the prehistoric southeastern United States (for more information about the overall goals of the project see Birch and Brannan 2015). Another objective is for students enrolled in the UGA Field School in Archaeology to become actively involved in research design, interpretation, and presentation of the results of the project. Students are divided into excavation teams focused on different aspects of the site’s history. At the end of the project, each team will design a scientific poster presenting their results.

We are currently in week two of the project. Each week, students will update this blog with posts detailing their team’s excavations and results.

The SMASH 2016 field school students hiking to the summit of Mound A. Photo credit: Sarah Luthmann.

Our team is digging an excavation unit focused on learning more about the segmentation of space at Singer-Moye—specifically understanding palisades at the site. A palisade traditionally is an enclosure built with deep wooden stakes, either for separation purposes or for defensive purposes. In 2015, a linear anomaly was detected by magnetic gradiometry. That same season, another team from UGA excavated a 2×2  meter unit and identified a trench with clay-filled posts which was interpreted as a palisade trench. Our unit, 2016_XU_3, is located 2 meters southeast of those 2015 excavations. Due to the lack of visible bastions, the 2015 team argued that the palisade was not defensive, but rather created a separation between Mound A to the southwest and the plaza to the northwest. Whether we have yet to find the bastions, suggesting the palisade as defensive, or some other use yet to be discovered, our research question remains: Why was the palisade built and what was its purpose?

Our first week of field school included setting up grid points, stringing up the unit, and looking for soil changes. Thus far we have dug through the humus level (organics at the surface), sandy grey soil, red sandy clay, and are currently digging through tough, red clay. In the current level of tough, red clay we have begun to see specks of yellow/white soil in addition to deep red clay. We believe the yellow/white soil to be rem
ains of the palisade wall and are coming down on it slowly to keep an eye on sudden soil changes.

Along with soil changes we have found coastal plain, heat treated coastal plain, and Flint River chert. We have also found hundreds of pieces of ceramics, though they have yet to be formally analyzed. Once the palisade is clearly demarcated, we will begin noting which side lithics, ceramics, and other finds are located in reference to the wall, mound side or plaza side, to help build our case for the purpose of this wall! 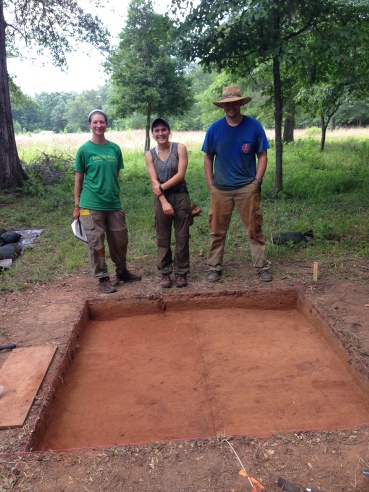 Our excavation unit, 2016_XU1 focuses on magnetometer data collected in March 2016 that reveals what we believe to possibly be a house located south of Mound H and east of Mound A. The location is of interest due to 2016_XU1 being located so close to the mounds and in such close proximity to where the midden is being excavated. 2016_XU1 is a 1x6m unit running E-W that is divided into an east side and a west side (2016_XU1E and 2016_XU1W) so that it is easier to manage. In XU1E we found what might just be a post hole (Feature 2) and another anomaly which could be a wall that looks like a thick ribbon of darker, harder soil. Further excavations need to done but we are still hopeful to find out more!

In the upcoming weeks, we plan to extend our units and find out further what the anomalies that were found in 2016_XU1E are. In all the units, our team has been finding copious amounts of pottery as well as many lithic, bone, and daub pieces. All of our work is, in my humble opinion, very exciting and I honestly cannot wait to see what happens next. As it is only the first week and so much has been done already, I can only imagine what will come next! 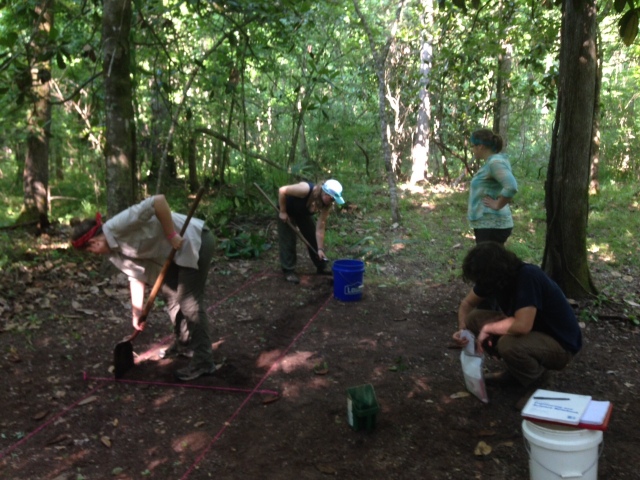 I am an undergraduate student at UGA majoring in anthropology. My main focus is in underwater archaeology. Since my only background in terrestrial archaeology is in geophysical surveying, I decided to attend a terrestrial field school this summer. The field school is directed by Dr. Jennifer Birch and PhD candidate Stefan Brannan. I’m truly honored to have an opportunity not only to be learning at this site, but to be able to work alongside our distinguished directors.

There are three teams in the school conducting archaeological surveys at the Singer-Moye site. My team is excavating an area of a midden deposit that spans many years of the site’s occupation. We immediately recovered artifacts as soon as we began excavating the first level of the midden excavation and are now 28 cm below the surface. We have recovered many ceramic sherds, lithics, and faunal material. I’m learning how to improve upon my identification skills for these different kinds of artifacts as we recover them. I’m also excited to try a technique, known as “flotation”, in the laboratory next week. By utilizing this technique we hope to recover faunal and botanical materials that we normally wouldn’t see by using a ¼” screen.

While the Singer-Moye summer field school has only just began, I am really impressed with the results I’m seeing at the site, and how well organized work at the site has been working under Dr. Birch and Mr. Brannan. I highly recommend this field school to any student who wants to work in the field of archaeology. It’s a rare opportunity to work at a Mississippian site, and Singer-Moye has so much to offer.