*Note from Dr. Birch: This week, SMASH 2016 wrapped up fieldwork. This is the first in a series of posts which will provide a preliminary summary of each excavation team’s findings.

Our team spent three weeks opening two excavation units in an effort to answer several research questions concerning the settlement patterns at Singer-Moye. These results are being synthesized with data from 2015 to help archaeologists better understand the extent and purpose of the palisade that may have separated Mound A (and possibly Mound H) from other activity areas.
In the previous year, a single excavation unit confirmed that a linear magnetic anomaly was caused by a trench of mottled fill running northwest to southeast between Mound A and the plaza. Because this anomaly seemed to disappear in the magnetometer data just a few meters away, we placed another excavation unit 2 meters to the southeast this year to investigate the extent of the palisade. After about a week of digging, often through hard red clay, we uncovered a level with the same colored mottling, running in the same direction. Although the soil changed color slightly as it ran from northwest to southeast, the trench did continue all the way across our unit with increased flecking and five post molds.

The bottom of our first excavation unit, showing the direction of the trench fill and five post molds

Curious now that this wall might go even further, we decided to place another unit, 7 meters south and 12 meters east, hoping to find out if it continued in a straight line. We also wanted to find a second palisade that had once run under Mound H, excavated in the 1990s. Our 1m x 3m unit was placed over the possible intersection of these two palisades, to see if they would cross. After a week of battling tree roots, we uncovered the white mottling that signified the top of the palisade trench running from northwest to southeast, but were unable to find evidence of the other palisade from under Mound H. 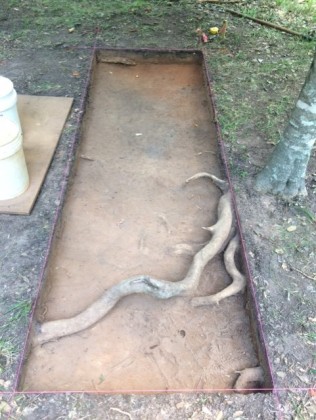 After: white mottling in center of unit

Was this second wall constructed earlier, and is it still hiding in deeper levels? Did it turn east or west, and perhaps we missed it with the placement of this excavation unit? Further testing in this area might answer our research questions about this second wall. For now, though, we can feel more sure that our first palisade does surround a large area to the southeast of Mound A. Future research questions might be developed to understand the purpose of this wall that may have enclosed, excluded, or delineated special spaces at Singer-Moye.