Structuring an Argument and Posting the Results: Investigating a possible Mississippian household

The goal of our team this field season was to investigate a possible structure identified in magnetometer data. This data presented itself as distinct anomalies that corresponded to what could be a central hearth and rectangular walls. We placed a 1 x 6 m trench, oriented east to west, over the central hearth and two sections of the walls. While we did not identify a wall in this trench, we did identify a large circular feature bounded by fired white clay and fire cracked rock. 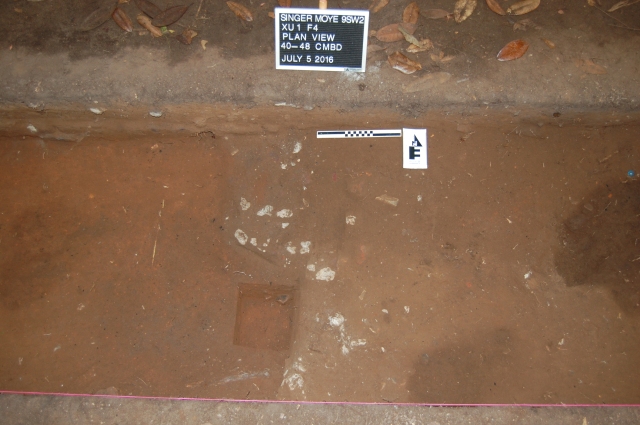 To the east of this feature we found a dense concentration of artifacts along the floor of the unit, and to the west we found a relatively clean area. In order to place this circular feature within the context of a structure, we expanded our survey coverage with a 1 x 1 m unit off of the east wall of our existing trench. We encountered the boundaries of a unit excavated in the 2013 field season early on and ceased excavation.

Post molds in the base of the team’s excavation unit.

The next step was to follow our anomaly north in order to capture a section of undisturbed wall. To accomplish this, we extended our excavation coverage with a 1 x 3 m unit oriented north-south. We countered another dense concentration of artifacts in the floor of the southern half of this new unit. Beneath this layer of artifacts, we encountered an interesting change in soil represented in the northern third of the unit. This change was represented by a more compact layer of red soil that was distinct from the softer dark brown soil in the southern half of the unit. Our excavations this season ended with the identification of three possible post-molds. As our field season draws to a close, the next step for our team is to return to the lab to analyze our data and to structure our interpretations.

The House team, clockwise from top: David, Jaimie, Adam (the author), and Shelby, with their unit at the end of this season’s excavations

1 Response to Structuring an Argument and Posting the Results: Investigating a possible Mississippian household