Singer-Moye (9SW2) is one of the largest Mississippian period mound centers in Georgia, both in terms of the overall site area and  density of monument construction. Unfortunately, despite sporadic archaeological investigations since the 1960s, Singer-Moye has remained one of the lesser known Deep South centers. The monumental site core contains eight earthen mounds and two plazas, covering some 6 ha. However, recent archaeological survey of the outlaying site area by Stefan Brannan (2018) indicate that the residential occupation of the site covers more than 30 ha. 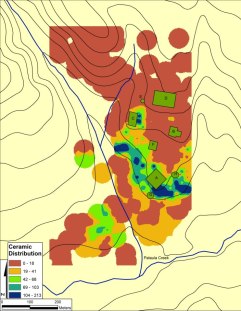 Singer-Moye was occupied between ca. A.D. 1100 and 1450. The site was occupied in three distinct phases, though it is unclear whether or not the site was abandoned between each phase (Brannan 2018). It’s estimated that at it’s greatest extent, the town contained more than 2,000 inhabitants who occupied the site core and adjacent land forms (Brannan and Birch 2017). Unraveling the occupational history of the site remains one of the primary goals of our ongoing research.

The SMASH project conducted active field research at the site between 2012 and 2017. We are now on hiatus while we prepare the results of those surveys and excavations for publication.